Carry On Up The Chindwin : Part 2. Hkamti to Hta Man Thi.

Part one of this story is published here. 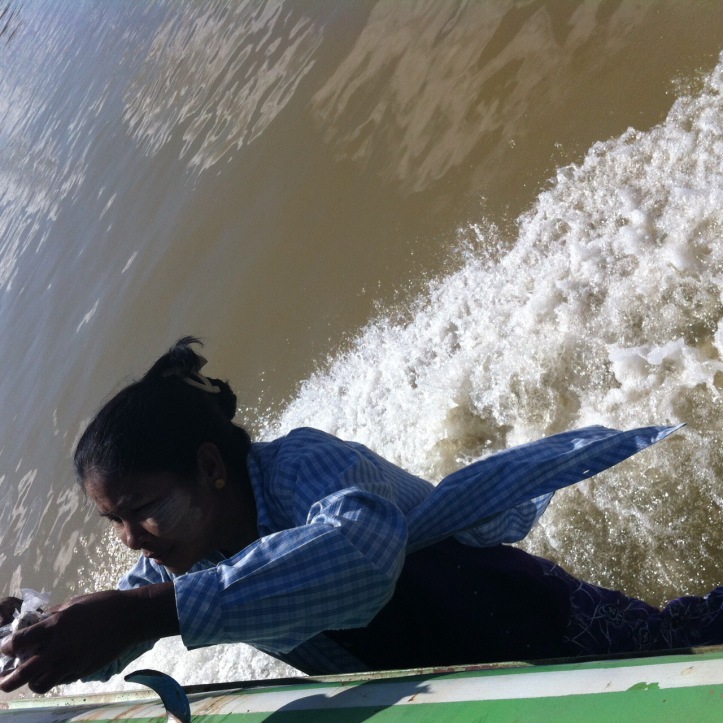 A long, slim, low-slung, noisy and powerful boat is scheduled to leave Hkamti heading for Homalin at 7am every day. Ours left slightly later, one lady having forgotten her baby-blue fake leather handbag (definitely worth waiting for). There were no spare seats, mainly because a large group of noisy, whisky drinking students were heading back to university after the holidays.

I was avoiding the students, early-morning-warming in the sunshine up on the roof, chatting with some cops, when the body went by. She was chilling in the shade down below because of the stupid rule that says women cannot sit on the roof of the boat (or the bus) because that might put them ‘above’ any monks sitting inside. And we can’t have that. 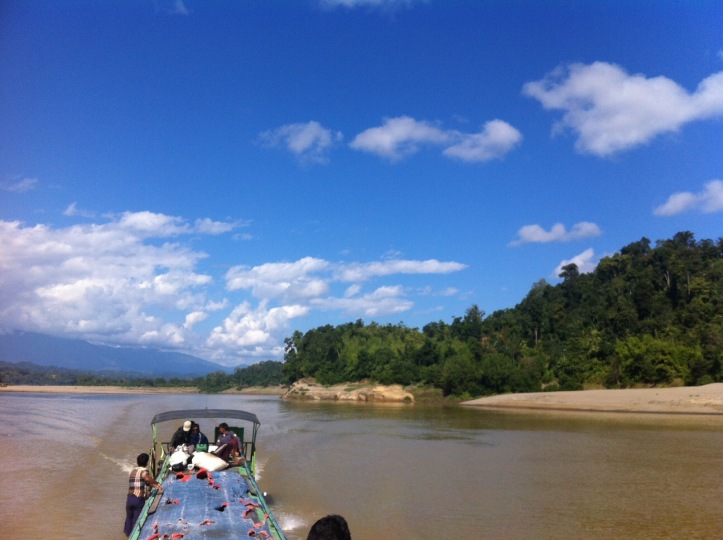 We were going only as far as Hta Man Thi and we should have been there by lunch. It was a late lunch.

Public boats on the Chindwin make numerous stops at small towns and villages, bits of which can sometimes be seen up on the bank. Any number of people will be get on or off, goods may come or go, there may be a few minutes to hop off and have a very quick look around.

Sometimes boats are greeted by food and drink hawkers coming aboard even before we hit the shore. At other times the driver pushes the nose of the boat into the soft riverbank, seemingly in the middle of nowhere, to pick up or drop off a lone traveller. 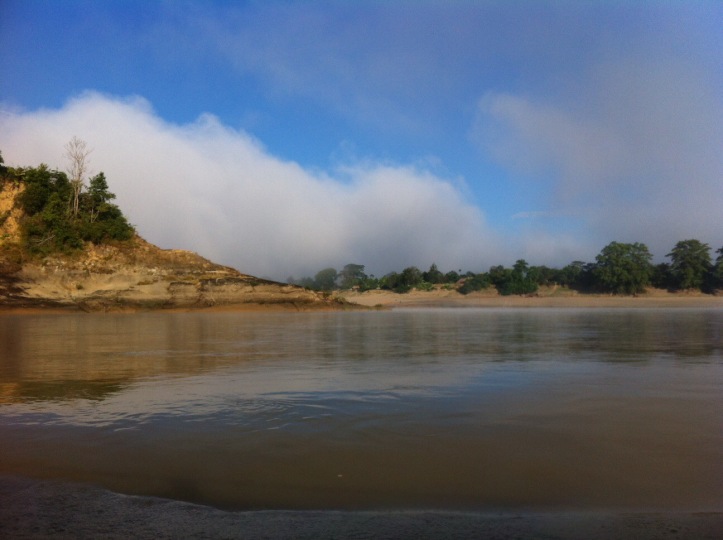 At 8am on this morning we stop at a mid-stream sandbank. Half a dozen sacks, contents unknown, go ashore where half a dozen grey piglets wrestle in the shallows. Villagers come aboard silver-bowl-collecting for the local monastery.

As we pull away a shout goes up from the stern of the boat and the engine roar dies quickly. Up front a fat young man wearing only AC Milan shorts throws the heavy anchor overboard to stop us drifting with the river current. The rope plays out until taught and the boat slowly spins, in silence, until facing upstream.

The propellor shaft has snapped. No-one in Myanmar takes for granted any transport schedule. It’s bad luck to ask the driver what time we will arrive. Anything could happen. And often does. We will wait patiently while our problem is resolved. We will get there when we get there.

After about fifteen minutes a smaller non passenger boat comes along heading our way and we quickly breast up and head onwards, though much more slowly than before. An hour downstream we stop at Nar Pee Linn a larger village with a few basic restaurants and shops along the high shoreline. The cops on the hot tin roof drink beer while half a dozen guys, with only a few tools, take only about an hour to switch the long propellor shaft for the spare. We are on our way again. 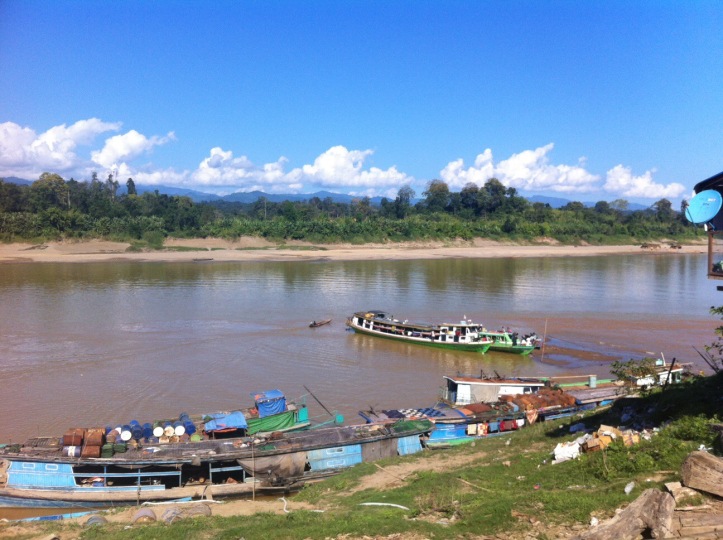 At this time of year river levels are low but there is still plenty of traffic and lots to look at. We pass colourful boats of all sizes with all sorts of goods stacked high on deck or hidden inside. 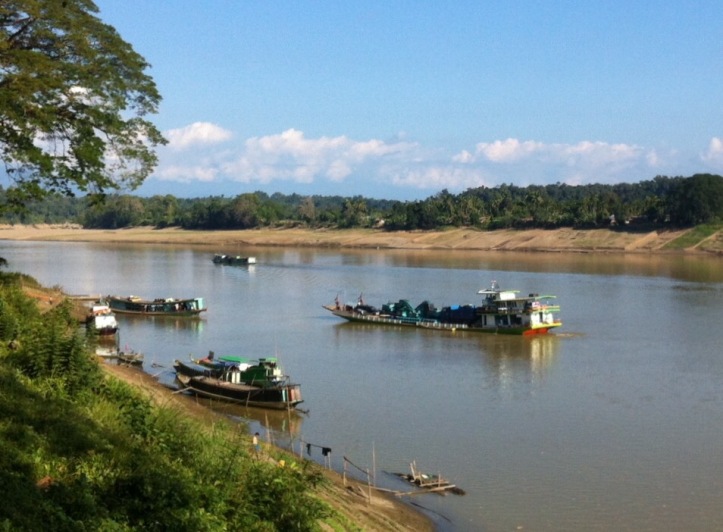 The slower, heavily-laden cargo boats coming up river have a man on each side at the bow swinging a long bamboo pole over his shoulder testing the depth as they go.

All along the river here, behind the green shoreline the orange scar of land turned over by gold mining is easy to spot. In many places pumps take river water up over the bank to current workings. Along the bank women and kids (apart from two I see dancing) are panning the dirty water coming back down. What can’t be seen is the arsenic and mercury that’s poisoning the river and everything in it.

We arrive in Hta Man Thi at about 3pm. Normally the boat would make its lunch stop here but our breakdown means the restaurants here missed out today. So did the passengers, our late lunch is very good.

All the passengers that got off with us, if not local, are heading on to Lay Shee in Nagaland including the now-armed cops. Others coming down from there – including the NYPD-hatted Chairman of the Naga whom we meet – have been waiting for the delayed boat.

There is a simple guesthouse, a very pleasant place to stay, one block back from the jetty. There’s a friendly tea shop almost next door where we watch Manchester United and chat with scientists who are counting and tracking gibbons (and, if lucky, tigers and elephants) in the 800 sq miles of jungle here on the eastern bank of the river.

They have six outposts in the uninhabited ‘park’, their work aided by the Shan people who live closest-by not traditionally being tiger or elephant hunters and by the access roads that were cut by logging companies ahead of a once-planned, but cancelled, Chindwin dam project.

Hta Man Thi turns out to be a great place to spend a few hours. Or a couple of days. Not least because close to the jetty we poked our nose into the small military camp and were invited in by one of the resident soldiers. It’s remarkable. 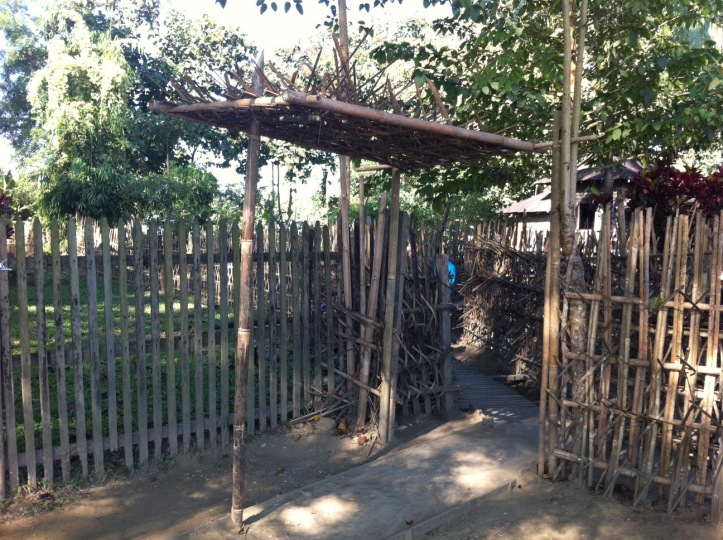 A bamboo gate swings outwards and upwards, hinged overhead. Two nasty fences of split, sharpened, inter-woven bamboo surround the camp and line the path that zig-zags into the secure interior. Between the two fences thousands of short, pointed strips of bamboo angle out from the hard, dark earth. Inside there are trenches complete with firing steps, dugouts and the concrete explosives store. And a very large, broken but still just-about intact, wooden barracks building.

Large trees shade the inner compound where half a dozen soldiers live and do their duty, whatever that is these days.

This stockade was a British military base, on the route used by many fleeing ahead of the Imperial Japanese Army in 1942. According to a former Indian Army officer we met later in Homalin every last man and woman who failed to flee soon enough or fast enough was killed, many with grenades.

He said it was ten years before the smell of death quite went away. 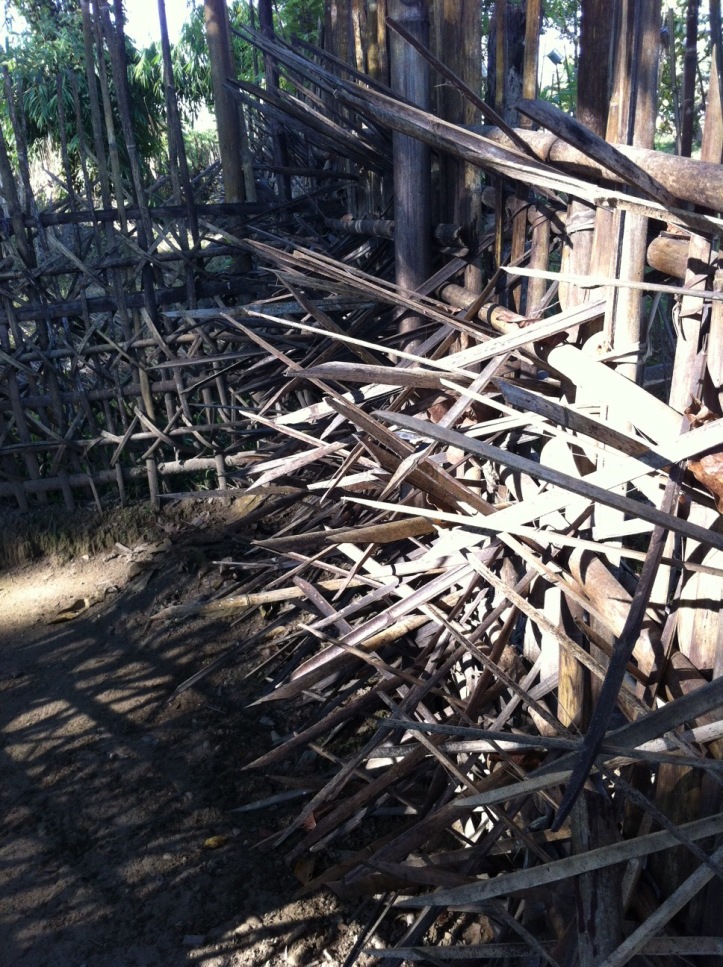 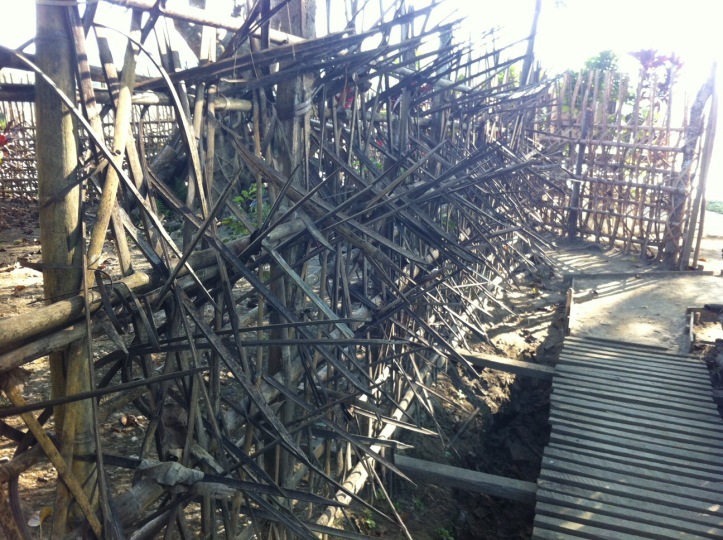 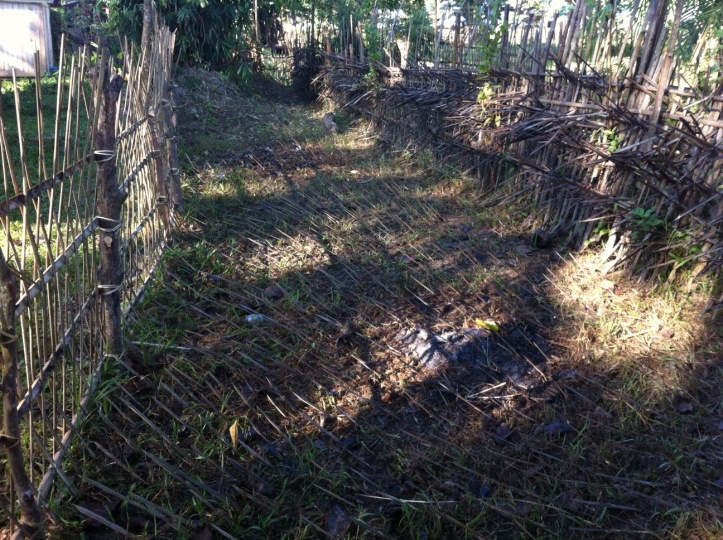 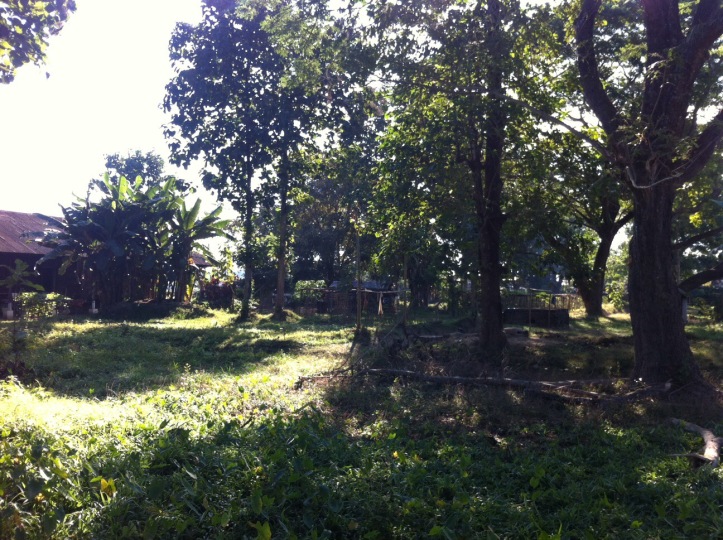 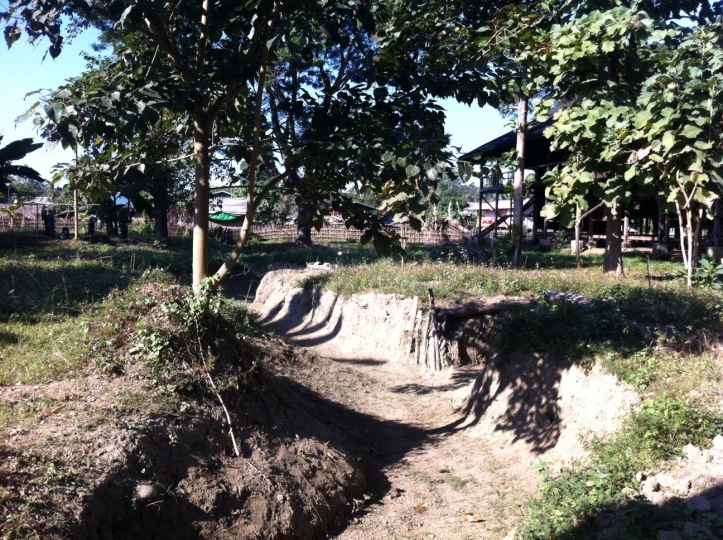 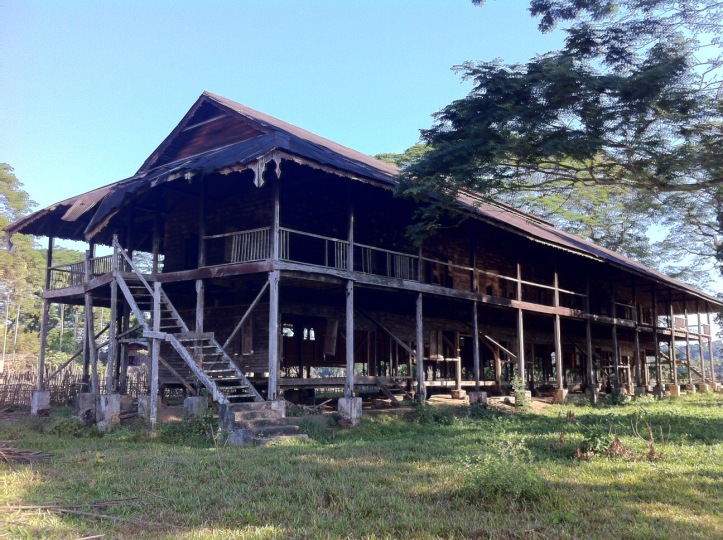 The next day we got up to Nagaland. I posted about that here.

Part 3 of this story : Hta Man Thi to Homalin is here. 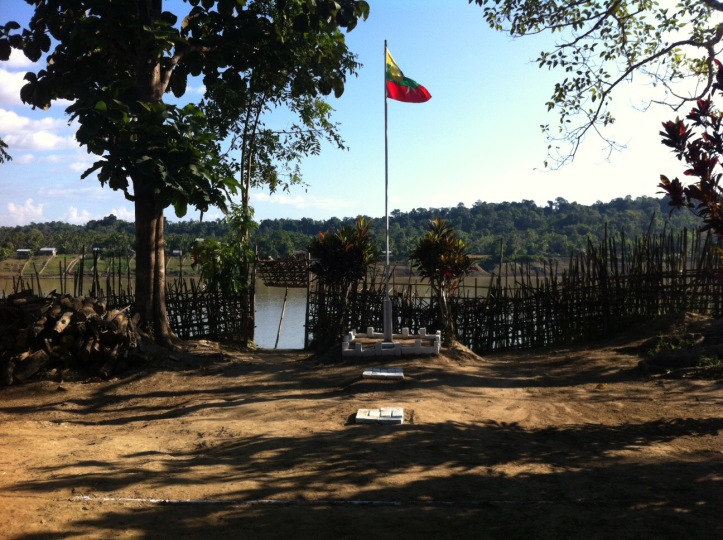