I’m not building bungalows on the beach.

Spend more than a few days anywhere near Myanmar’s best beaches and people you meet will start to ask if you’re a wannabe investor looking to buy a bit of tropical paradise.

That’s especially true if any of those people are themselves already invested in spoiling the bit of tropical paradise they like to think of as their own.

A foreigner cannot ‘own’ a beach. Whatever bit of whichever beach they call their own, it’s not really theirs. They can only rent it, or otherwise exploit it, in partnership with whoever actually owns it.

It belongs, if it belongs to anyone, to the government, a local fisherman or farmer (or a smart relative of theirs) or quite likely to a Yangontrepreneur who had the sense to buy a bit of beach before buying beaches became hip.

But what drives a foreigner to want to own a bit of tropical beach, and if owning a bit of paradise is so important to them, then why spoil it?

Cutting a road through the jungle invites locals en masse (and their litter) to come paddling. Bungalows, guesthouses and resorts invite the tourist horde to destroy the peace and pure nature that made the place so attractive at first sight. Dressing it up (or down) as an eco-resort might make a bit of a difference but if you really want to be eco, why not leave the beach as you found it?

I’m not naïve. It’s inevitable that a set of beaches so attractive and maybe uniquely undeveloped in SE Asia will be developed for tourism.

Most likely developed beyond the capacity of local infrastructure to support the extent of the development. Look at creaking-at-the-seams already Ngapali for a good-bad example of what not to do – especially perhaps in Myanmar.

If the government, old or new, their friends in business and the people living on or near the beaches see increasingly rampant development as a sensible way forward then that’s their look-out. It might work well for them in some ways. In others it won’t for sure.

But what makes any foreigner want to be party to the destruction?

If you’re doing something small-scale for the love of the place and the people you will help to share your bit of paradise, perhaps it’s psychologically understandable. But it’s still unnecessary for you to be involved. Why not leave it to the locals?

If you’re doing it for the money then there are easier, safer and more responsible ways to make money. Buy oil futures. Deal cocaine.

If you’ve spent twenty-five years working in banking and now you want to live the dream on a beach of your own, feel free.

What part of the dream requires you to knock-up fifty overpriced rooms for upmarket european three-nighters and the repetitive beach cocktail conversation that comes with them?

Have you built yourself a paradise or a prison? Either way it’s built on sand.

No. I’m not building bungalows on the beach. I’m happy camping.

An edited version of this post appeared in the Myanmar Times on 18.3.2016 along with this great cartoon. 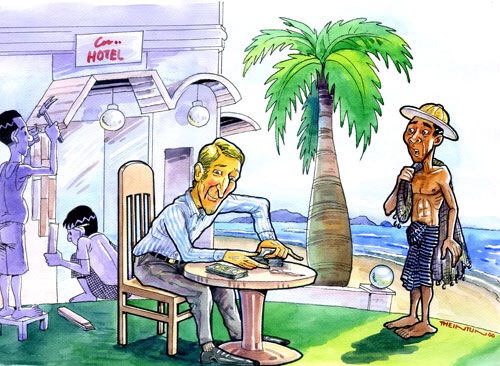